Bob's Burgers is gearing up for Season Two, which debuts Sunday, March 11, at 8:30 PM. I am story boarding on Season 2, as I did on Season 1. If you haven't watched the show, you should, even if you hate Fox TV. It's one of the best written series I've worked on in my 29 year career in the biz.
Anyway, I did a series of drawings of the BB cast during some Season 1 down time. These drawing are my take on what the characters looked like if they were "real"... sort of like what Spielberg did with the Herge characters in the recent "Tintin" cgi feature. 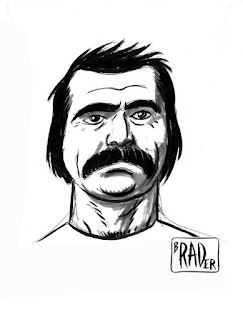 Here's my version of Bob.
Posted by Brad Rader at 9:29 PM

These Bob's Burger drawings are brilliant! I love the show and these are such a treat. It's amazing how real they look, but still recognizable and full of the spirit of the characters. These gave me a big smile!