All this week, in celebration of "Fogtown" in its new paperback release, I'm blogging/posting preparatory artwork done way back in late '06. The project was long in its genesis, given that it wasn't published until August '10 in hardcover, and August '11 in paperback.
Our final installment is composed of miscellaneous designs.
This is "Colonel" Thorpe, self-righteous wielder of the bully pulpit, the Glen Beck/Rush Limbaugh of his day. In reality, he was a sexual pervert/predator and secret crime lord. I based him off Karl Rove. 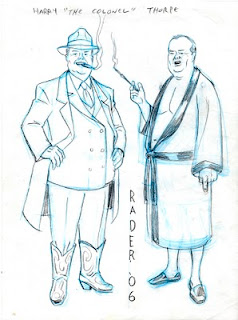 Next up is Carmen, early male-to-female transgender. I tried to get this across by making his/her hands and feet a little large, and giving him/her a slight brow ridge. However, we don't see enough of her in the course of the novel for it to really communicate. As is frequently the case, one does way more research and prep than is rarely used. 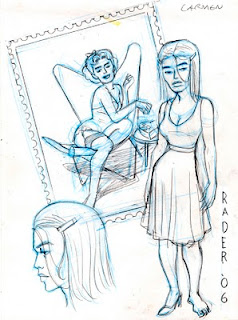 This is Greg, ex-hustler, now altar boy at the Blood of the Lamb ministry. I based him off James Dean, but tried to make him look younger and tougher. 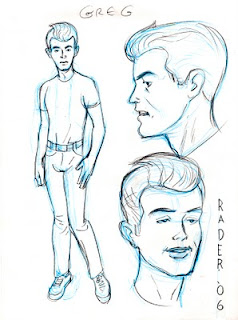 This is the exterior of The Blood of the Lamb Ministry. I put as much work into designing it as I did any of the human characters, so I thought I'd include it here. 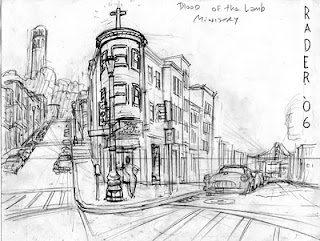 Lastly, we have Magda, pretend mother of Carmen. In reality, she has been hired by Thorpe to engage Frank to find Carmen, setting our poor anti-hero up as the patsy. She's based on Lupe Ontiveros, star of Mexican cinema and occasional supporting roles in the USA. 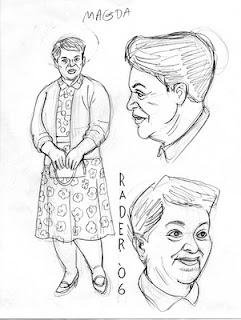 Well, that's it. If you haven't read Fogtown, and find your curiosity piqued by this blog, check it out on Amazon, or buy it direct from me. I recommend doing the latter and paying full price; buyers from my site will get the added value of a sketch of one of the characters inside the front cover.
Posted by Brad Rader at 10:50 PM