All this week, in celebration of "Fogtown" in its new paperback release, I'm blogging/posting preparatory artwork done way back in late '06. The project was long in its genesis, given that it wasn't published until August '10 in hardcover, and August '11 in paperback.
Today we look at "Bone" White, Ex-pugalist, "Colonel" Thorpe's main henchman and Frank Grissel's down-low fuck buddy.
These first drawing made him look too tough; Andersen wanted him prettier. The character was fiercely protective of his face; none of his opponents could ever land a blow on it. His hand were another matter; they were supposed to be gnarled, scarred from abuse. 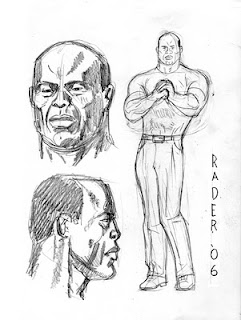 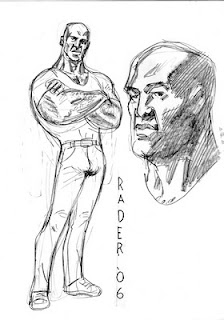 This was more in the right direction. I came up with the idea of making his hair "period" by going with the "conk" look. 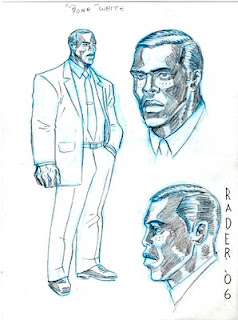 Then I wanted to see what he looked like with his clothes off, assuming that he would appear thusly at some point in the novel.

Anderson thought he looked too beefy in this drawing and wanted to go with a more "slimmed down" look.