MY ALASKA VACATION, 2011
SATURDAY, JUNE 25, 2011, Part 1
It was raining hard when we woke up this morning. Last night’s dark clouds were not a vain threat.
Dennis, Carrie and Will slept in a tent, rather than in the cabin with the rest of us. They informed us that it rained really hard during the night. I sleep with earplugs; I was blissfully unaware.
One of the smaller windows in the cabin façade was covered with water droplets. Lolly found this curious, as it was covered by the roof’s eaves. I ventured that the rain had bounce off the stepladder I had left leaning against the house, but this seemed improbable. However, Dennis later made the same speculation, unprompted by either Lolly or I.
I was ambivalent about the rain; it meant I wouldn’t be able to finish painting the Tlingit Dragon Sigil on the cabin façade. On the other hand, I had an excuse to be lazy.
Mom and Amy left around 10:00 AM to return to Anchorage. Mom had a memorial to attend, and Amy had a modeling job that afternoon. I considered returning with them to attend the memorial (for Ramon Signs, the wife of Paul Signs and the mother to 3 kids near my younger siblings ages we used to play with as children in the late 60’s/ early 70’s). I don’t remember why I didn’t; I regretted it later.
As it happened, the rain stopped around 10:30 and it became semi-sunny soon after. I completed painting the black parts of the Dragon Sigil by 12:30 PM. We had no salmon, white or jade colored paint, so I was unable to complete the project. However, Carrie, watching me work, pronounced that the job wasn’t nearly as daunting as she’d anticipated, and predicted that she might finish it later. 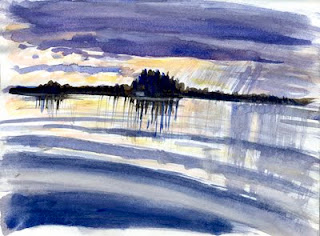 I was surprised by my lack of pain when I awoke this morning. Usually, when I overdo things with my ankles, I suffer for it the next day. I had been standing as I worked for about 4 hours, which definitely qualifies. I was pretty achy as I finished the task but I was actually more bothered by my low back than my ankles. I was pretty wiped out though; I couldn’t stay awake for the drive back to Anchorage, and, when we arrived, I crashed out until about 6:00 PM.
Posted by Brad Rader at 8:46 AM