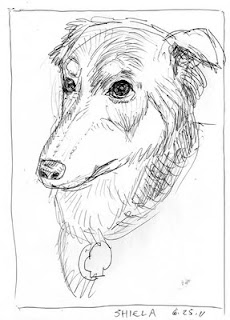 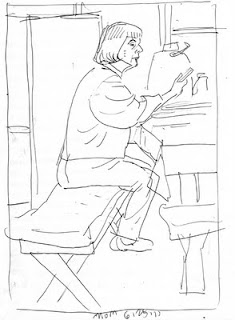 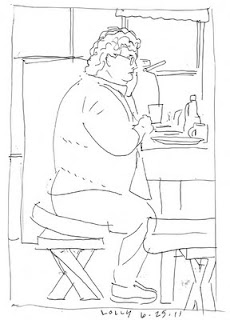 FRIDAY, JUNE 24, 2011, Part 3
After dinner, Lolly and I pull out our guitars and jammed. Carrie, Amy and Mom sang along, mostly to Beatles songs, but some other stuff too, depending on what Lolly had brought in the way of sheet music. Occasionally we sounded pretty good.
Around 9:00 PM, Carrie announce that she, Dennis and Will were going on a boating expedition to Meadow Creek, on the other side of Big Lake. She invited me along, insisting that I bring a sweater and rain slicker even though the day was still warm and sunny. We set off in Dennis’s powerboat, Carrie and Will on the bow, I sitting inside under the visquine cover, Dennis captaining. Sheila, Lolly’s Australian Shepard bitch, moved aimlessly around the boat.
It took 20 minutes to reach the stream head on the marshy flats. This was the wet lands/ estatuary part of the river. Swamp grass was as high as our heads, cutting off the view. There were lots of lotus-like flowers growing out of the water, and bird nests (which were pointed out excitedly and I was unable to spot). Muskrats swam out of our way. Carrie pointed out a beaver lodge in the center of the water way, which was barely twice the width of or boat and shallow to the point that sometimes I could feel us scraping the top of the swamp grass waving languorously beneath us. Small cabins were scattered throughout the swampy plane with “No Trespassing” signs posted nest to moored flat-bottom boats.
After about 30 minutes of this, Dennis killed the motor and we drifted in the waning light. Frankly, I was tired and bored, so I lay down in the on the bow. Sheila kept me from dozing off as she moved excitedly around me; at one point Carrie had to grab her to keep her from jumping overboard. “She hasn’t learned”, Carrie critiqued. Apparently this had happened before. All this noise bothered Carrie; she wanted silence so she could appreciate the sounds of nature. Dennis voiced a desire to spend the night there, moored to the creek-side. He couldn’t figure a way to keep the insects at bay though. I tried to overcome my boredom by approaching the experience as meditation. I might as well be here as anywhere. I abstained from asking what the plan was, specifically when we were due to return back to the cabin. After a while, Carrie asked how I was doing. I said I was tired, so Dennis fired up the motor and we returned as we came.
By this time it was almost 11:00 PM. The twilight sun skimmed the tree lined, hilly horizon. Overhead, the sky was obscured by dark clouds, lit bright orange and purple by the lingering sunset.
Posted by Brad Rader at 8:50 PM