MY ALASKA VACATION, 2011
FRIDAY, JUNE 24, 2011, Part 1
We arrived at our family cabin at Big Lake while it was still morning, traveling from Anchorage in 2 vehicles. I was a passenger with Lolly in her car; Mom drove the other, with my college age niece Amy along for the ride. My other younger sister, Carrie, her husband, Dennis, and my 9 year-old nephew, Will, arrived in the afternoon.
It was hot and sunny all day, finally clouding over around 10 PM, though one wouldn’t notice it because the twilight sun was so low to the horizon that the dark clouds above didn’t block it out before it finally ducked behind the horizon, sometime around midnight.
After lunch, Mom put me to work re-painting the front picture window frame, and the Inuit Dragon protective sigil that my father had drawn, designed and carved into the façade of the cabin, and the family had painted some 35 years prior. Actually, the way this went down was: Mom casually mentioned that they had scraped the old paint off the window frame 2 weeks prior and that she was amazed how much work the spiders and other insects had done since then in that short period of time. I took the hint and started earning my keep. I was amazed at how inadequate was the previous job of scraping. Mom directed me to the ladder stored under the porch; it was homemade from 3” x 5”, 9’ tall and HEAVY. It barely reached the top of the window frame, creating a triangle the bottom of which was 2’ from the wall.
As I began re-scraping the window frame, I saw that the Eskimo dragon’s paint, especially the black, was fading and cracking/peeling. I resolved to give it a touch-up as well as the window frame. I went over it with a stiff 10” long, 2.5” wide bristle brush, getting rid of the insect schmutz and much of the old paint. While thus engaged, I noticed that the original caulk between the upper part of the window frame and the cabin façade was decayed and coming loose. Lolly told me that we had no more caulk or black paint. I insisted we make a run to the nearest hardware store. 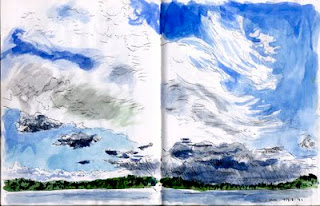 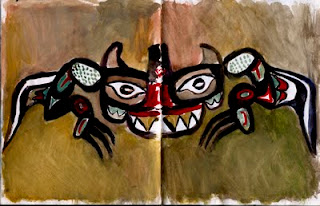 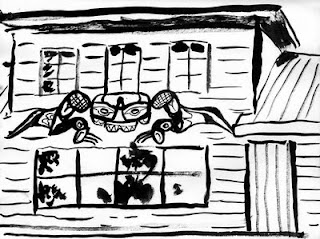 TO BE CONTINUED
Posted by Brad Rader at 9:33 PM

Actually, I did these drawing at least 10 years ago on a previous vacation, but thought they would fit in well here.
Sorry about Will. I never guess people's age (to their face); I'm almost always wrong.