I did this drawing  yesterday. It reminds me of similar poses by Sal Buscema, even though I've never made a study of his work, or even much liked his stuff. During the early/mid 70's I was "forced" to look at his work because he illustrated the adventures of characters I liked; I viewed his as the apotheosis of the soul-less hack, phoning the work in without variation or inspiration. 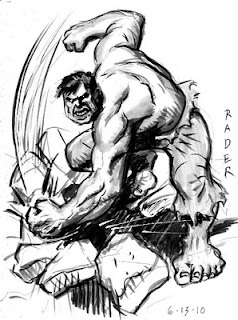 Now I can appreciate his work for its clarity, economy and dynamism. Take what  you like and leave the rest. I still find his character designs ugly and repetitive (everybody basically looks the same), but he knows how to throw a mean punch.
Posted by Brad Rader at 10:57 PM